The Seattle Kraken had Beniers step in and play 17 minutes a night in a 10-game stint after his NCAA season ended last year and he put up nine points in those games. He is the most well-rounded rookie in my opinion, and will also likely play one of the most significant roles of any rookie. He's on an+ expansion team that doesn't have many options to go to, and Beniers has proven that he can be a huge asset to the team. He's already the top-line center on the team, and he will be playing alongside the team’s two biggest offseason acquisitions in Stanley Cup winner Andre Burakovsky and the incredibly underrated Oliver Bjorkstrand.

There's a reason he is the favorite, and he has started his season out with 3 points in two games. He's someone to watch for this year as one of the most promising young players in the game.

Bet NHL risk-free up to $1,000 at BetMGM right now! Take advantage below!

One of the biggest trends you will see in the Calder trophy race all season is who is getting the most ice time as a rookie, and outside of Beiners, McTavish has seen an increased role with the Ducks. Albeit not at his listed position. While he is a natural center, he may not have a path to top minutes as a center because Trevor Zegras has locked down the number one center role and offseason acquisition Ryan Strome has filled in on the second line. Instead, he's lined up as a winger to begin the year.

In his first game of the year, he recorded two assists, showing why he is such a valuable asset to the team. The center in him is going to make him want to share the puck around, and as a winger, he should still excel at that all year. Plus, he's going to be getting huge minutes all season long.

He's currently the second favorite behind Beniers, and he is just one point behind with a game less played.

Thompson has shot up the leaderboard after winning his first two games of the season and allowing 3 goals in those games. That includes a shutout in just his second NHL game against the rebuilding Chicago Blackhawks. He owns a 1.50 GAA and .947 SV% after two contests, but the entire goalie situation in Vegas is complicated. Robin Lehner is injured and is likely to miss the entire season, but there is always a chance he comes back. But what if Thompson remains hot and keeps playing well? We could have a goalie controversy on our hands, which is always something to worry about when you put your money down on a bet.

Of course, he'll keep the job if he keeps playing like this, but it is pretty unsustainable. His stats will surly drop off a little bit as he plays more games, but if he is playing well, Vegas would be smart to keep him in net.

Bet this FOR FREE at DraftKings right now! Sign up for a new account, make a deposit, bet $5 and they'll give you $200 in free bets! Click the button below and take advantage! 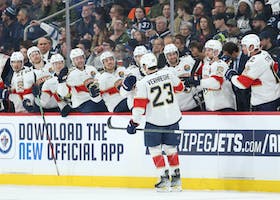 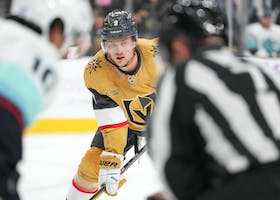 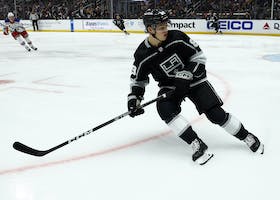