With the Colorado Avalanche hoisting its third Stanley Cup and first since 2001 Sunday night, the dust has settled on what was another pulsating, riveting NHL season.

As Gabriel Landeskog was hoisting the Holy Grail for the first time, many neutral hockey fans were probably already turning their attention to the 2022-23 NHL odds, wondering which team could emulate Colorado’s historic Stanley Cup run.

The odds are fresh off the press for the 2022-23 campaign, with most of the likely suspects cracking the top 10.

The Avalanche stand imperiously and predictably atop the favorites’ pile. So it’s natural to wonder if the Avs can follow in Tampa Bay’s footsteps. By winning consecutive Cups in 2020 and 2021, the Lightning enjoyed breathing rarified air only two other franchises have since the start of the 1990s.

Back to the question at hand.

Yes, the Avs have the pedigree and, after finally overcoming playoff adversity, the mental fortitude and collective resilience to do it again next season.

Now they’ve gotten over the proverbial hump, and it’s hard to imagine Landeskog, Nathan MacKinnon, Cale Makar and Co. winning only one Cup. So the question is, will their second trophy come immediately on the back of the first?

The second favorites are a perennial playoff disappointment. But will things finally be different for the Toronto Maple Leafs in 2022-23?

Pegged at +850 to win their first Stanley Cup since 1967, the Maple Leafs, after coming within a goal of ousting Tampa Bay, will feel like they’re on the cusp of glory. The problem is they’ve felt that way for quite a few years.

However, the Maple Leafs were discernibly better in their devastating first-round loss to the Lightning. They will feel like anything is possible if they can find a way to make it out of the first round, something they haven’t accomplished since 2004.

By now, you know never to count out the Lightning. However, it feels like their run at the top might be coming to an end. Then again, anything is possible while Andrei Vasilevskiy is between the pipes.

The Hurricanes were missing their go-to netminder for the duration of the playoffs. With Frederik Andersen back, Carolina is a bonafide Cup contender.

The Panthers needed to learn a hard lesson – like the Avs and Lightning did in previous playoffs – before being able to ascend to the next level. Losing to the Lightning in four should help Florida prepare accordingly for the 2022-23 Stanley Cup playoffs.

The Golden Knights and Oilers desperately need an elite netminder, and the Flames have to find a way to produce when it matters most.

Of the chasing pack, the Hurricanes and Panthers represent the best value to win the 2022-23 Stanley Cup.

If you’re looking for a sleeper, the +2000 Rangers offer exquisite value, thanks primarily to Igor Shesterkin. The 2021-22 Vezina winner offers his team precisely what the Oilers and Golden Knights are missing, a netminder who can single-handedly win a playoff series or four. 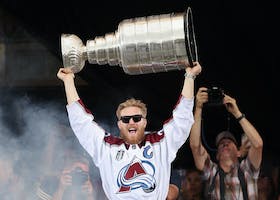 NHL Betting: 3 Non-Favorites to Back With Stanley Cup Futures
2 months ago  |  NHL

Understanding Line Movement
a year ago  |  ANY