The NBA playoffs continue Tuesday with Game 4 of the Western Conference Finals between the Mavericks and Warriors. Let's take a look at the game lines and key betting trends you should know before betting on Game 2 at Golden State with the Warriors leading the series, 3-0.

One trend to note is that the BetQL NBA model has gone 18-9 (67%) on all picks rated two stars and higher in the last seven days for a total return of $509 on $100 bets! BetQL subscribers can see more betting trends and all of our best bets, including player props, with star ratings for every game. Click below to sign up for a BetQL Day Pass!

At this point, the mindset for the Mavs should be solely focused on just not getting swept. Down 3-0 in the series, forget the whole "no team has ever come back from three down" narrative, and just keep the season alive tonight.

Nothing has seemed to work for Dallas in the first three games. They've blown leads, shot poorly from three, then shot better from three, gotten huge games from Luka Doncic, then had contributions from others besides Doncic -- and yet, they still sit a loss away from their season ending.

The Warriors even had a less-than-Warriors-like shooting night last time out, hitting only 34.4 percent of their threes. Yet, Dallas came in at just 28.9 percent from the outside, and 40 percent overall.

Andrew Wiggins has been terrorizing Luka too. Whether it's been his stellar defense on Doncic, or this dunk that broke NBA Twitter, the former No. 1 overall pick is now suddenly getting the title of "underrated" on a consistent basis.

This is what makes the Warriors so lethal -- if it's not one guy, it's another. Steph Curry can light you up for 30, but so can Jordan Poole. Klay Thompson can have an off night, but Wiggins will find a way to pick up the slack. Oh, and let's not forget Kevon Looney who's suddenly turned into a dominant big man, with back-to-back 12-rebound games, and 21 points to go along with that in Game 2.

Two of the three games in this series have gone under, with Game 1 coming in a massive 17.5 points lower than the total, and Game 3 under by 8. The problem here is, Game 2 went over by 27 points, so we've definitely had a bit of a roller coaster here.

Jason Kidd is 16 - 1 SU as a home favorite of -250 or less while coaching Dallas though, and with the Mavs sitting with their backs against the wall, Golden State could let up just enough given their three-game cushion, allowing Dallas to steal a game at home. 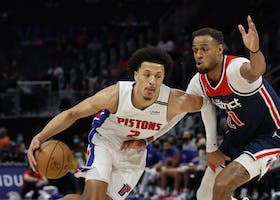