It should be no surprise that No. 3 Ohio State is not only undefeated, but they've also won all three of their games by wide margins. The win over Notre Dame was the closest, which ended up an 11-point win, followed by a 33-point win over Arkansas State, and last week's 77-21 blowout of Toledo.

Wisconsin rebounded from their loss to Washington State with their own blowout win, 66-7 over New Mexico State.

The Buckeyes sit third in national title odds right now, +300 on FanDuel, and anything less this year would be considered a failure both outside and inside the program.

Now, they open their Big Ten schedule against the Badgers, and will likely lean again on Heisman favorite CJ Stroud (+200) to carry the offense. Even though we could say "well it was against Toledo" Stroud still completed 22-of-27 passes for 367 yards and five touchdowns, and they could use that against a Wisconsin team allowing just 8.0 points per game.

Graham Mertz threw three touchdowns in that 66-7 win over New Mexico State, and the Badgers are averaging just under 40 points per game. Mertz has been off to by far the best start of his career, completing 71 percent of his passes with six touchdowns and just two interceptions.

They've only given up 21 points and a total of 738 yards (246 per game) the entire season, but there's a much bigger test coming this weekend with Ohio State as opposed to who they've seen so far. Wisconsin will try and at least limit the Buckeyes on the ground, allowing 76 rushing yards per game, with Ohio State getting 207 yards a game on the ground.

Sure, Wisconsin's defense has been strong through the first three games, but Ohio State is another animal, while only allowing 14.3 points per game only with those 47 points offensively. 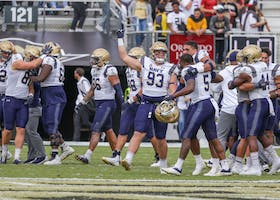 CFP Power Rankings: Which Teams Will Make the Playoff?
10 days ago  |  NCAAF