The last month of 2022 brings us loads of ice hockey to bet on, and we have a modest six-game NHL slate to pick through and discover some best bets on just another manic Monday. So be ready to make some wagers and let's cash. BetQL subscribers can see more betting trends and all of our best bets with star ratings for every pick.

One trend to note is that the BetQL NHL model is heating up, going 68-50 (58%) on all picks the last three days for a total return of $818 on $100 bets! Take advantage of BetQL's free trial and see all of today's best NHL bets, plus what the model is projecting for every NFL, NBA and NCAA football and basketball game this week! Start your free trial today!

Our first game brings us to the Garden, where we see the St. Louis Blues on the road taking on the New York Rangers. Both teams have really struggled as of late, losing four of their last five games. The Blues were expected to be bad, so it isn't really shocking from them. Their defense and goaltending has really let them down, allowing 33.3 shots per game and 3.75 goals per game. The offense has been average at best, and simply can't keep up with the amount of pressure they allow every game. They have lost three straight, and I don't think it's going to get much better for them as the season progresses.

The Rangers have been one of, if not the most, disappointing teams in the entire league this year. They have a load of talent at every position, but they can barely float above .500, and that's if you don't count the OT losses. It's very weird, considering they are getting 33.8 shots on goal per game, which is well above average. They also only allow 29.2 shots on their own net, so they defend well and play good offense. Yet here we are. The biggest problem for the Rangers is that they can't score. They put all this pressure on opposing teams, but they can't get the puck in the back of the net.

MY PICK: I feel bad about it, but I can't pick the Blues here on the road. They have looked atrocious recently, and New York should be far better than they are. Take the Rangers -1.5, because they have to break out at some point, and you'll get plus-money here.

Easily one of the best matchups of the night, the Vegas Golden Knights visit Boston to take on the NHL's best team in the Bruins. Vegas' goaltending has been incredible, allowing just 2.62 goals per game, while the offense is taking 33 shots per game and scoring 3.42 goals each time out. They have struggled a bit recently, losing three of their last five games, but this is still one of the better teams in hockey right now.

Boston has looked unbeatable. The Bruins have won four of their last five games, and are sitting at an unbelievable 20-3 to begin the season. I talked about the Vegas goaltending situation, but Boston takes that up a notch. They are allowing an insane 2.13 goals per game, easily the best mark in the entire NHL. No one can score on them. The offense is also one of the best in hockey, scoring 4.0 goals per game and taking 34.5 shots. It doesn't get much better than how the Bruins have played to begin the season, and it has helped them vault to the top of the standings.

MY PICK: We took a shot with the defending champs last time out against Boston, and that didn't turn out well at all. We have to try again here with the Knights. Again, this is a team you rarely get a number like +145 on. They are a good team, and one of the few that can actually beat Boston.

The night cap brings us to Vancouver, where the Montreal Canadiens will travel west to take on the Canucks. Neither team has been particularly impressive to begin the season. The Canadiens really struggle to score on most nights, getting just 2.79 goals per game. The offense is pretty average, getting 29.9 shots on goal as well. The defense has been perhaps their worst unit, allowing 33 shots on goal, and the goaltending hasn't been good either. They are allowing 3.46 goals per game. Overall, they just aren't a very good hockey team, despite a .500 record.

Vancouver isn't much better, to be fair. The Canucks have had some of the worst goaltending in the league, allowing a whopping 3.76 goals per game. The defense can't be solely to blame, as they aren't good, but allow 32.7 shots per game which isn't horrible. Offensively, this team is about average to above average. They actually score 3.36 goals per game, which is pretty good, but get about 30 shots on net.

MY PICK: Two bad teams means that I am going with the team that is getting plus-money. No way should the Canucks be a -200 favorite against almost anyone, especially a Canadiens team that is pretty equal to them. 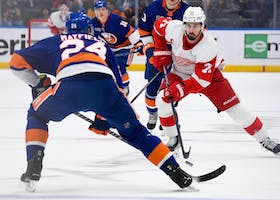