Check out this NHL Atlantic Division preview from BetMGM

The three favorites are most likely to battle for Atlantic Division supremacy, but which of the Stanley Cup contenders will reign supreme?

Those teams, who finished first, second, and third last season, will once again battle for divisional superiority and home ice advantage in the postseason.

Can the Panthers repeat as the division winner, or will the Maple Leafs finally live up to lofty expectations? Meanwhile, Tampa Bay looks to spoil the party and win the division crown for the first time since 2018-19.

Who Will Win the Atlantic Division?

Based on current odds, the Toronto Maple Leafs have the best chance to win the NHL Central Division in 2022 (+200).

Favorites to win the division, the Maple Leafs finished the 2021-22 campaign in second place, seven points behind Florida.

The Maple Leafs have all the tools to compete for the division crown, including an abundantly talented top-six forward unit with reigning MVP Auston Matthews, the second favorite to repeat.

Mitch Marner finished 10th in league scoring with 97 points, while captain John Tavares and William Nylander round out the top four offensive threats. The Leafs had the second most potent offense last season, scoring 3.80 goals per contest. Only division rivals Florida scored more.

However, the Buds allowed 3.07 goals per game, the 14th most in the NHL. That doesn’t sound woeful, but a repeat of those mediocre defensive numbers won’t be good enough to fend off the Lightning and Panthers.

In addition, the Maple Leafs have put all their eggs in Matt Murray’s catching glove. The two-time Stanley Cup winner is a shadow of his former self but can rise to prominence again, given his experience and history.

However, Murray hasn’t played more than 50 games in seven NHL seasons due to a litany of debilitating injuries. And he didn’t make it past 30 in either season with the Sens. Unless Kyle Dubas knows something everyone else doesn’t, the Maple Leafs represent a risk too great.

Swap Jonathan Huberdeau for Matthew Tkachuk, and little has changed offensively for the Panthers in the lead-up to the 2022-23 campaign.

Ben Chiarot and Claude Giroux, both of whom exited Florida in the offseason, were deadline deals, so neither player was instrumental in leading the Panthers to the division crown.

However, Florida lost top-four defenseman MacKenzie Weegar in the blockbuster Huberdeau trade. In conjunction with Chiarot’s departure, the Panthers are left relatively short on top-end defensive talent, which will prevent them from repeating as division champions.

Last season’s finalists have a few more seasons at the top before their elite talent collectively passes their prime. The Lightning finished third in the Atlantic Division in 2020-21, largely due to the long-term absence of Nikita Kucherov, who missed 35 games due to a lower-body injury.

Andrei Vasilevskiy endured a comparatively less-than-brilliant season for the first time in recent memory. However, he returned to Vezina and Conn Smythe form in the playoffs and will have unwavering focus set on extending his otherworldly best into the 2022-23 regular season.

With those two difference makers returning to prominence, the Tampa Bay Lightning should edge their primary rivals and win the Atlantic Division.

Indisputably the best of the rest, the Bruins face the reality that they no longer measure up to the three favorites. While still playing at a high level, captain Patrice Bergeron is 37 years old and is unavoidably starting to fade, albeit at a glacial rate.

Upper echelon talents David Pastrnak and Charlie McAvoy will lead the team long after Marchand and Bergeron hang up the skates, while the Bruins have the best 1A and 1B goaltending punch in the NHL.

Jeremy Swayman and Linus Ullmark add assurance and stability, which should prevent them from finishing any lower than fourth.

It won’t be long before the Ottawa Senators are considered a division contender. Unfortunately for Sens fans, there is almost no chance of their beloved team competing atop the division in 2022-23.

However, the Sens improved during the offseason, probably more than any other team.

Add those proven assets to Brady Tkachuk, Anton Forsberg, Tim Stutzle, and Drake Batherson, and you have a team that should soon compete for a playoff spot, although probably not in 2022-23.

If there were a Hart Trophy handed out to executives for work done in the off-season, Red Wings’ general manager Steve Yzerman would be a shoo-in. Detroit landed Ville Husso, the Blue’s No. 1 netminder last season, and picked up the stout, no-nonsense Ben Chiarot from Florida.

Throw those players into the mix with Dylan Larkin, Tyler Bertuzzi, Lucas Raymond, and promising prospect Simon Edvinsson, and the Red Wings should be playoff-bound within a season or two.

The Buffalo Sabres have missed the postseason in 11 straight years. In addition, they haven’t won a playoff series since 2007, and, unfortunately for Sabres fans, those two stats won’t change this season.

The young Sabres crew is starting to show glimmers of promise, but, like Rome, they’re work in progress. Behind the Senators and Red Wings’ growth and improvement, the Sabres are forced to look down the barrel of another bottom-feeding season.

Yes, they have Owen Power, the first overall pick from the 2021 NHL Entry Draft. He has an abundance of talent and unlimited potential. However, he’s at least a few years away from reaching his peak power. Tage Thompson, 24, is coming of age, and Jeff Skinner, 30, still has something left in the tank.

Rasmus Dahlin, 22, is a top-class defenseman who will lead the way for years to come, but that’s where the talent well runs dry.

The Sabres have all sorts of issues in goal, with 41-year-old Craig Andersen and 33-year-old Dustin Tokarski the duo who shared the heaviest workload in 2021-22. Suffice it to say that bodes horribly for Buffalo and their tormented fanbase.

How the mighty have fallen. Just two seasons after their Stanley Cup final appearance, the Canadiens are almost assured of finishing bottom of the Atlantic Division.

Carey Price is probably out for the season after devastating news about his ailing knee. Jake Allen, who will adopt the No. 1 role in his absence, isn’t first-choice material.

Nick Suzuki led the team with 61 points, while 21-year-old Cole Caufield finished second in team scoring, with 43 points in 67 games. The Canadiens acquired Sean Monahan from Calgary, who has bundles of talent.

However, the former Flame forward, not unlike Price, has been plagued with injuries in recent seasons and is, at best, an uncertain commodity. 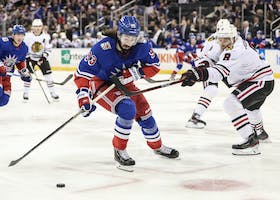 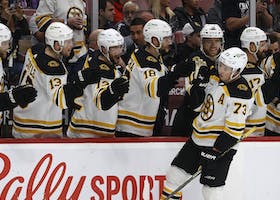 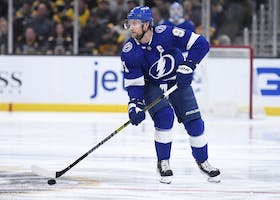