While played intermittently, the Tennessee-LSU series has created some memorable moments over the years. The Tigers have won five in a row in this series, as the Vols last beat the Bayou Bengals in 2005 in Baton Rouge, 30-27, in overtime. Now Tennessee enters this game as a road favorite with a win this year as a road favorite, covering against Pitt a few weeks ago. However, the Tigers are 3-0 ATS at home this year. The LSU defense has been the catalyst for four straight wins since a season-opening loss to Florida State, keeping four straight opponents to 17 points or less. Also, Brian Kelly is 10-1 SU during his coaching career after his team has allowed 17 points or less in four straight games.

The shocking part of this year’s Red River Showdown is that neither team is ranked. Oklahoma, in particular, appears to be in a little bit of trouble after starting 0-2 in the Big 12. It’s not just that the Sooners have lost two straight games, it’s that they’ve allowed 96 points over those two games. Of course, history is on Oklahoma’s side, as the Sooners have won four straight games over Texas, including the 2018 Big 12 Championship Game. However, the Longhorns bring more momentum into this matchup and hope to have starting quarterback Quinn Ewers back from injury.

Do not adjust your screen; the Kansas Jayhawks really are 5-0 and ranked, at football. In his second season with the Jayhawks, Lance Leipold has turned Kansas football completely around, which is something far more accomplished coaches have tried and failed to do. To be fair, TCU is probably the toughest test the Jayhawks have faced this year. Much like Kansas, TCU is unbeaten SU and ATS. The Horned Frogs are also fresh off a 31-point thrashing of Oklahoma. TCU is also 9-1 against Kansas since joining the Big 12, although last year’s game was a close one with the Horned Frogs escaping 31-28.

Arkansas at No. 23 Mississippi State

Could Mike Leach’s Bulldogs be a sleeper in the SEC West? MSU took down Texas A&M, 42-24, last week and could make some noise with a win over Arkansas this week. The Hogs, meanwhile, lost to Texas A&M two weeks ago and couldn’t hang with Alabama last week. They’ve now lost three straight games ATS. It’s not all bad news for Arkansas, as Raheim Sanders and mobile quarterback K.J. Jefferson have helped give the Razorbacks a top-10 rushing attack nationally, averaging over 232 yards per game on the ground. But during his career, Leach is 32-13 ATS against teams that average over 200 rushing yards per game.

Texas Tech at No. 7 Oklahoma State

After going to the Big 12 Championship Game last season, the Cowboys look like serious contenders in the conference this year after beating Baylor on the road last week. Meanwhile, the Red Raiders couldn’t build on the momentum after their upset win over Texas a couple of weeks ago, losing to Kansas State last week. The Red Raiders also have just two wins in their last 13 games against Oklahoma State. They also have just one win in Stillwater since 2001. The Texas Tech defense is once again a problem, allowing 32 points per game against FBS opponents while the Cowboys have scored a minimum of 34 points in every game this year.

There are four teams still unbeaten in Pac-12 play, and these are two of them. The Utes are road favorites in this game and have won five straight head-to-head games against UCLA, including a 44-24 win last year. That 20-point margin is actually the closest game in the last four meetings between these teams. However, Chip Kelly has the UCLA offense humming, scoring at least 40 points in four of five games this season. The Bruins are 4-1 O/U this year with Chip Kelly going 7-0 ATS during his tenure at UCLA when the Bruins are coming off back-to-back games that hit the over.

Bet college football risk-free up to $500 at BetRivers right now! Take advantage below!

No. 9 Ole Miss at Vanderbilt

Lane Kiffin has his team 5-0 heading into this week’s rivalry game with Vanderbilt. The only caveat is the Rebels have failed to cover as a home favorite in back-to-back weeks. But Kiffin is 16-5 ATS after losing back-to-back games ATS. The Rebels have also won seven of their last nine games against Vandy, winning the last three by an average of 24 points despite a tough, 31-17 game last year. Of course, the Commodores have won five of their last nine home games against the Rebels.

No. 21 Washington at Arizona State

The Huskies remain in the Top 25 this week despite a road loss to UCLA that cost them their undefeated record. They now set their sights on trying to avenge last year’s 35-30 loss to Arizona State by winning in Tempe for the first time since 2015. Of course, the Sun Devils are in a little bit of trouble, losing four in a row, including that disappointing loss to Eastern Michigan. Those four losses have come by an average of 16 points and a minimum of nine points, so ASU hasn’t been that close to winning any of those games.

Washington State at No. 6 USC

Lincoln Riley has USC off to a 5-0 start and a top-10 ranking. However, the Trojans have failed to cover the spread in back-to-back games against Pac-12 opponents. On the flip side, Washington State has won four in a row ATS and is 1-1 SU as an underdog this year, only losing to Oregon by three points. Since taking over at Wazzou midway through last season, Jack Dickert has gone 3-1 SU in true road games. Of course, the Trojans have beaten the Cougars in back-to-back seasons by a combined score of 83-27.

South Carolina at No. 13 Kentucky

Mark Stoops has personally turned the tide in this series, going 7-2 against South Carolina, leading the Wildcats to seven wins in the last eight years. Of course, the Wildcats have to be a little concerned after turnovers cost them in a 22-19 loss to Ole Miss last week. The 'Cats have scored just 45 total points in their two SEC games this year. That said, South Carolina has conceded an average of 46 points per game in two losses to SEC teams this year.

Things got out of control when these teams met last year with the Demon Deacons winning, 70-54. Fittingly, these teams are a combined 6-3 O/U this year, as Army is giving up 36.7 points per game against FBS opponents. Meanwhile, Wake’s 31 points in last week’s win over Florida State was a season-low. With that stretch, the Demon Deacons are now 10-3 SU under Dave Clawson when they’ve scored at least 31 points in three straight games. Also, in seven games between Army and Wake Forest this century, the Demon Deacons are 6-1, although all of those games have been decided by 14 points or fewer.

This will be just the sixth time this century that these two programs have crossed paths. Notre Dame has won four of the five previous meetings, although BYU did win a game at South Bend in 1994. In more recent history, Drew Pine got the Notre Dame offense going in the Irish’s last game after assuming the starting job for the injured Tyler Buchner. Notre Dame scored 45 points in that game after combining to score 55 points in the first three games of the season. On the other side, BYU has scored at least 38 points in three of five games this year, although the Cougars have yet to concede fewer than 20 points in a game, which is a big reason why they are 4-1 O/U this year.

No. 20 Kansas State at Iowa State

The Wildcats have gone from a disastrous loss to Tulane to the top of the Big 12 standings with wins over Oklahoma and Texas Tech in the last two weeks. They also have a win over Missouri on their resume, so Kansas State looks like the real deal now that Adrian Martinez is playing well. Now the Wildcats are hitting the road for one of the more underrated rivalry games in the Big 12. While a slight favorite, K-State hasn’t won in Ames since 2016 with the Cyclones winning three of the last four games in this series. Also, Matt Campbell is 11-2 ATS as a home underdog during his tenure at Iowa State.

After a 4-0 start, the Seminoles suffered their first setback of the season last week, losing to Wake Forest despite being a six-point home favorite. Hitting the road to face N.C. State won’t be easy with FSU losing four of their last five games against the Wolfpack; in fact, the Seminoles haven’t won in Raleigh since 2016. Of course, it’s also gut-check time for the Wolfpack after last week’s loss to Clemson. To be fair, the N.C. State defense has been good this year, keeping everyone but Clemson to 20 points or fewer, but they haven’t forced a turnover in back-to-back games. Yet, Dave Doeren is 21-12 SU with N.C. State after back-to-back games in which the Wolfpack forced one turnover or fewer.

No. 12 Oregon at Arizona

The Ducks looked like a disaster in the season-opener against Georgia, but it’s been a different story since then. Oregon has rattled off four straight wins, scoring over 40 points each against BYU, Washington State and Stanford. To their credit, Arizona is 3-2 and Jayden de Laura has given them a top-10 passing attack, averaging 340 yards through the air per game. The Wildcats surely have a long way to go, but how much of an improvement they can make on last year’s 41-19 loss to Oregon could be a good barometer to judge how far Arizona has come after last year’s 1-11 campaign. 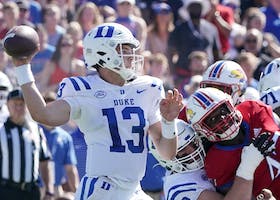