BetMGM and FanDuel have set the Celtics' win total at a league-high 56.5 games

NBA win totals for the 2022-23 season have been released, and the Celtics are not only favored to win the NBA title next year (+450 at BetMGM), but they have also opened with the highest win total in the league at 56.5.

The Phoenix Suns, Milwaukee Bucks and L.A. Clippers are all next at 53.5 each, followed by the Warriors at 52.5 and then the Denver Nuggets and Philadelphia 76ers at 50.5 apiece.

That's an awfully high win total for Boston, which won 51 regular-season games last year en route to a run to the NBA Finals. Let's take a look at how the Celtics have improved this offseason and whether they're worth a futures bet.

Following their exit from the NBA Finals last season after a spectacular run in the playoffs, the Celtics have been very busy this offseason with some stellar new additions to the squad. They signed Danilo Gallinari to a two-year, $13.3 million contract and acquired 2017 NBA Rookie of the Year Malcolm Brogdon in a deal with the Pacers. Last season, Gallinari averaged 11.7 points and 4.7 rebounds per games in his 66 games played. Meanwhile, Brogdon averaged a team-high 19.1 points with the Pacers last season, as well as 5.9 assists and 5.1 rebounds per game.

Both of these additions, plus the roster they have already that includes Marcus Smart, Jayson Tatum, Jaylen Brown and Robert Williams III, put the Celtics in a great spot to dominate this season. So it makes sense that their win total is so high, especially since they are the favorites to win the NBA Finals next year.

Think the Celtics can go over this win total or are you looking at them to hit the under? Either way, you can bet on this win total at BetMGM risk-free with the offer below! 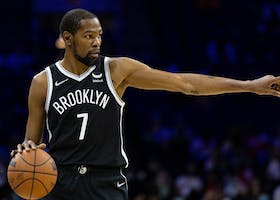